In 2014, Stiga joined the mainstream of table tennis rubber – ‘New Generation’ tension rubber – by the launching of ‘Airoc’. One year later, Stiga announced ‘Airoc Astro’ which is faster variation of ‘Airoc’. ‘Airoc’ and ‘Airoc Astro’ are fundamentally different from former Stiga rubbers for example ‘Calibra LT’ or ‘Magna’. ‘Airoc’ and ‘Airoc Astro’ are the first weapons for Stiga to seriously compete with Butterfly ‘Tenergy’ series and most of German rubbers those are made by very similar technology as ‘Tenergy’.

And, 3 years after the launching of ‘Airoc’, Stiga finally introduced one step advanced model of New Generation Tension rubber. Stiga named it as ‘Mantra’, and positioned it higher than ‘Airoc’ and ‘Airoc Astro’.

At present, there are three different series of ‘New Generation’ tension rubbers in Stiga range – ‘Mantra’ series, ‘Airoc Astro’ series and ‘Airoc’ series. And, of course the top model is ‘Mantra’.

Before the introduction of ‘Mantra’, customers can select between ‘Airoc’ and ‘Airoc Astro’ by simple classification : ‘Airoc’ for spin, and ‘Airoc Astro’ for speed. But, the role of ‘Airoc’ was a bit changed because ‘Mantra’ is advanced from ‘Airoc’. For that reason, at present the criterion of the selection of Stiga ‘New Generation’ tension rubbers is as follows:

Three variations share everything except for sponge hardnesses. But, three variations are separately registered to ITTF. For that reason each variation has its own registration number. 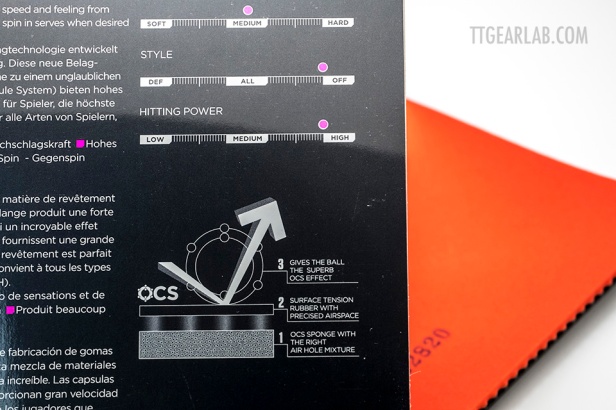 Feeling and performance of new ‘orange red’ OCS has been noticeably improved from former ‘light blue’ version of OCS. (Of course the performance of sponge is not concerned with sponge color. Stiga applied new color for new sponge just for distinguishing.) Further, new ‘orange red’ OCS isn’t curled up any more. Differently from ‘Airoc’ and ‘Airoc Astro’, ‘Mantra’ is almost flat. It makes applying glue much easier. 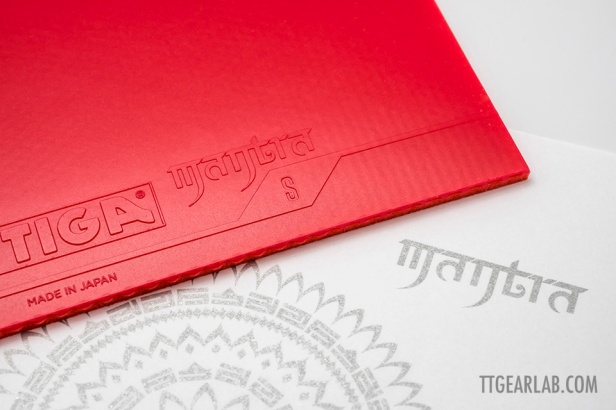 Pimple geometry of ‘Mantra’ is identical to that of ‘Airoc’ or ‘Airoc Astro’. It is categorized as ‘Type A’, i.e. ‘high density + Cylinder shape’. (Regarding the pimple geometries of ‘New Generation’ tension rubber’, please refer to ‘Three typical pimple geometires of ‘New Generation’ tension rubbers‘) Distance between center of pimple and center of pimple is about 2.2mm. The height of pimple is about 0.8mm. Although the top sheet of ‘Mantra’ is somewhat hard, it is not for speed but for spin. The ability of drawing good arc trajectory is the fundamental target of ‘Type A’ geometry. And, ‘Mantra’ is made by the basic philosophy of ‘Type A’ geometry.

For testing of ‘Mantra’ series at table tennis club, I selected two blades – Stiga ‘Clipper CR’ and Butterfly ‘Korbel’ because those two are very good for understanding the basic characteristic of covering (= rubber). I’m considering to also test with Stiga ‘Carbonado 45’ and ‘Arctic Wood’.

The basic characteristic of ‘Mantra’ doesn’t change by blade as long as I tested ‘Mantra’ on ‘Clipper CR’ and ‘Korbel’. There are some rubbers who behaves differently on the blades with different rebound speed. However, ‘Mantra’ doesn’t. ‘Mantra’ show the same behavior on ‘Korbel’ and ‘Clipper CR’ The only difference is overall feeling becomes relatively harder on ‘Clipper CR’ and relatively softer on ‘Korbel’. Also, there isn’t fundamental difference by sponge version – H, M and S. ‘Mantra H’ is just the hardest and ‘Mantra S’ is just the softest. It makes the selection of sponge hardness easy. If a player doesn’t have any preference of feeling, starting from ‘Mantra M’ will be the best solution because it is the standard version of ‘Mantra’ series. Because I think that ‘Mantra M’ is the most important version among three variations of ‘Mantra’ series, I will first describe the result of ‘Mantra M’.

Not only the power but also the ease of use is the advantage of topspin with ‘Mantra M’ series. Pulling up the ball at very low position is very easy. It is very important advantage because from the introduction of poly ball there have been many cases that ball sinks down after bounce. Dealing with that kind of ball is very easy with Mantra. And, the amount of spin is bigger than expectation. That makes counter-attack of opponent difficult. As a result, managing rally with ‘Mantra’ is very comfortable.

‘Mantra M’ is the rubber for spin. Very skilled players will also be satisfied with the spin performance of ‘Mantra M’. And, the players who has thought that the power of ‘Airoc M’ is not sufficient will be satisfied with ‘Mantra M’. However, ‘Mantra M’ may be inadequate for hard hitters because it is not the rubber for smash. For that kind of players, ‘Airoc Astro M’ will be better choice. Also, entry players may feel that ‘Mantra M’ is somewhat difficult rubber, because of the hard feeling of its top sheet. 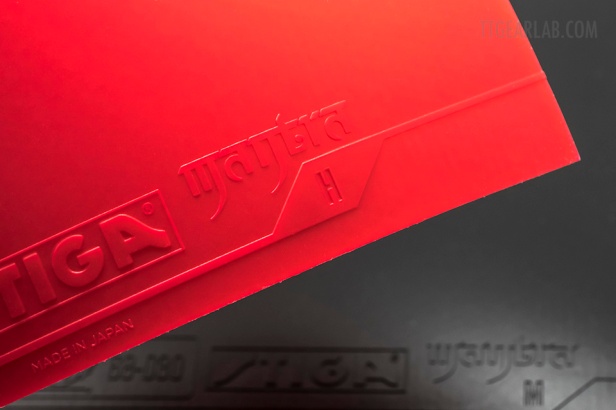 ‘Mantra H’ provides higher ‘maximum’ spin performance than ‘Mantra M’. However, it is useful only when player can utilize it. So ‘Mantra H’ is the one for pure professional. Its feeling is of course harder than that of ‘Mantra M’. In case an ordinary player wants to try ‘Mantra H’, 5-ply blade with middle speed range may be better than thicker/harder blade such as ‘Clipper CR’. I expect that many highly skilled players will like the feeling of the combination of ‘Clipper CR’ and ‘Mantra H’ because they have the ability of utilize it.

‘Mantra S’ shares the basic characteristic with its harder brothers – ‘Mantra M’ and ‘Mantra H’. However, the trajectory of topspin is somewhat linear. For that reason, I felt that ‘Mantra S’ is closer to ‘Tenergy 64’ than ‘Tenergy 05’ at the beginning of court test. That characteristic is apparent it is combined with ‘Clipper CR’. It makes the topspin from mid-distance area easier, especially in case the impact force of player is not sufficiently strong. Also, it can be very good characteristic for backhand side.

On the forehand side of ‘Clipper CR’, ‘Mantra S’ is somewhat uncomfortable when I play at close-to-table area due to its long and linear trajectory. But, I think that it is just because I’m not familiar with using the rubber of soft feeling on my forehand side. The evidence is that I can use ‘Mantra S’ on my backhand side without any problem. All backhand technic from block to topspin are so easy and effective. 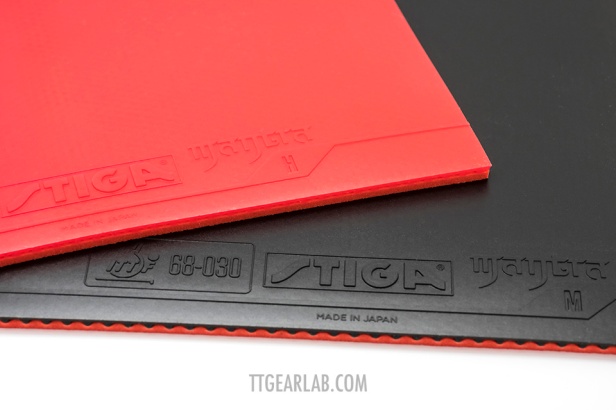 Stiga ‘Mantra’ is focused on spin performance that is the key factor for top players’ rubber. ‘Mantra’ is a ‘New Generation’ tension rubber, and its pimple geometry is ‘Type A’ whose pimple arrangement is dense. Top sheet of ‘Mantra’ is relatively harder than those of former ‘New Generation’ tension rubbers of Stiga, and also harder than those of competitors for example ‘Tenergy 05’. The hard top sheet is one of the key factor of ‘Mantra’ that provides top level of spin performance when it is used with poly ball.

‘Mantra’ provides the best performance in case player plays mainly with topspin. On the contrary ‘Mantra’ is not the best rubber for smash. ‘Mantra’ draws high arc very well while providing top level of spin performance.

CONS
• Not the best for direct hitting.
• Top sheet is somewhat hard. It makes feeling and ease of use a bit worse, when compared with ‘Airoc’, ‘Airoc Astro’ or ‘Tenergy 05’.

The characteristics of thee versions can be summarized as: 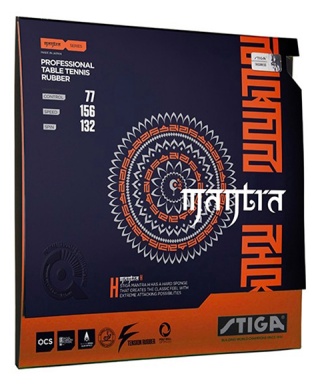 MANTRA H (53º version)
• Maximum spin performance among three version.
• Player can make good topspin by thin impact.
• Ease of use is not good due to hard feeling. But, very precise control is possible.
• Good for close-to-table topspin. Topspin from mid-distance area requires the power of player. In any case, this version is recommended for highly skilled players.
• Not recommended for entry players or all-round players. 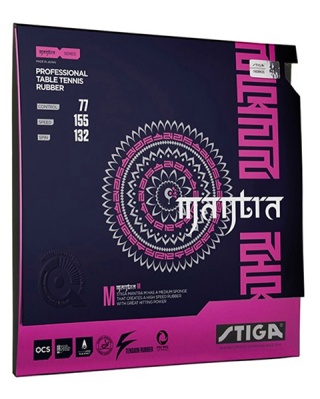 MANTRA S (43º version)
• The softest among three versions of ‘Mantra’ series.
• Trajectory of topspin is a bit linear. But, it still draws very good arc.
• Good for continuous topspin from mid-distance area.
• Very good as a rubber for backhand side because of the safety of block and flip.
• Recommended not only for skilled players but also for entry players. 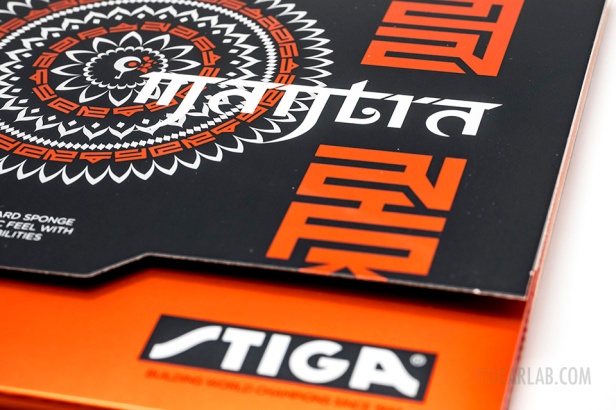 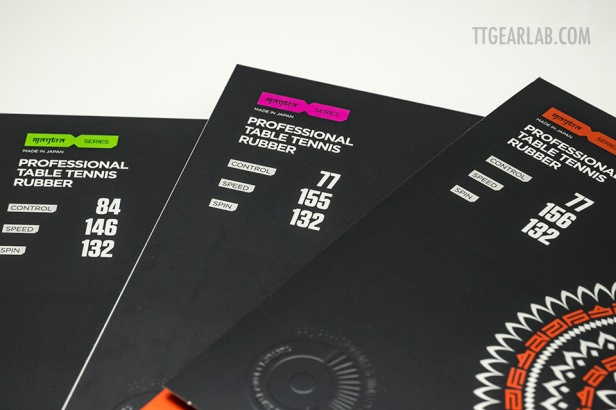